Recommend to a friend?

How likely is it that you will recommend a company to a friend or a colleague? That is the question we are asked more and more often after a finished purchase or being in contact with the customer support at a company where we are a customer. But why is this question asked?

Well, the question is at the core of the measurement of customer loyalty using the Net Promoter Score (NPS) [4]. In this blog post I will present the background to the measurement of customer loyalty using the NPS. But all methods based on relatively simple models have obvious weaknesses. In the next post “NPS – some reflections” I will share my reflections and criticism about the NPS method.

Loyal customers buy new products, services and accessories, they say a good word about the company to their friends and can provide valuable feedback for further development. They are also easier to communicate with, and usually less price sensitive. Only those companies that truly put their customers at the center of their business can be sure they win loyal and faithful customers.

Almost thirty years ago Bain & Company started to investigate the relationship between customer loyalty and growth [3]. They discovered that companies with most satisfied and loyal customers earned revenue more than twice as fast as their competitors with less loyal customers. But a really good method to measure customer loyalty didn’t exist. Many of the measurement methods and customer surveys that existed at that time were complicated and so extensive that it was difficult to draw concrete conclusions that could be used in practice for development and improvement.

After several studies and tests Bain & Company, together with Fred Reichheld and Satmetrix, discovered that a loyal and very satisfied customer will recommend the company, product or service to his/her friends. By asking the question (the ultimate question) “How likely is it that you will to recommend the company to a friend or a colleague,” you could measure customer loyalty.

It was obviously not enough to just ask the ultimate question “How likely is it that you will to recommend the company to a friend.” However, responses of individual clients had to be complied into responses of larger customer groups to build a “score” reflecting the loyalty among the company’s total customer base. The ultimate question was, therefore, combined with the so-called Net Promoter Score (NPS) [4]. NPS was first described in an article in the Harvard Business Review (2003): “The One Number You Need to Grow” [1]. The article was later followed up and developed in the book “The ultimate Question” (2006) [2] written by Fred Reichheld.

The NPS-method is based on the fact that customers are requested to indicate the likelihood of a recommendation on a scale from 0 to 10. It is of course possible to use other scales, but 0-10 scale provides enough options and spreading of the responses. Starting a scale with a zero (0) also automatically means that zero is the lowest probability and 10 is the highest. If the scale begins with one (1) there is a risk that some people will think that one (1) is the highest probability.

As a next step the respondents were divided into three groups [3]:

Obviously, it is very important to try to understand why customers are dissatisfied. And if it is a large and growing customer group, it often means substantial changes in the company, its offerings and in the relationships with customers. In other words, it is a matter of survival.

The benefit with the NPS-method is that it boils down to a single value (score). To obtain a NPS value you should to reduce the percentage of Ambassadors with the proportion of Detractors. In the best case you could have 100 % of Ambassadors (which is most probably unrealistic), and in the worst case – 100 % of Detractors. Example: Suppose that 60 % of your customers indicate the likelihood of the recommendation in the range of 9 and 10, and 30 % of customers indicates recommendation in the range of 0-6. The overall NPS value for the company will then be: NPS = 60-30 = 30 %. Please, note that NPS can become negative if the number of Critics exceed Ambassadors.

The NPS value can be measured for the entire company, in certain departments or for specific product lines. To get more information about the reasons of the assessment it is common to ask a supplementary question, for ex. to ask to explain why the customer indicated a particular likelihood or to ask to give suggestions for improvement. Below is an example from Adobe’s product Premiere Pro (that I am very pleased with and happy to recommend). 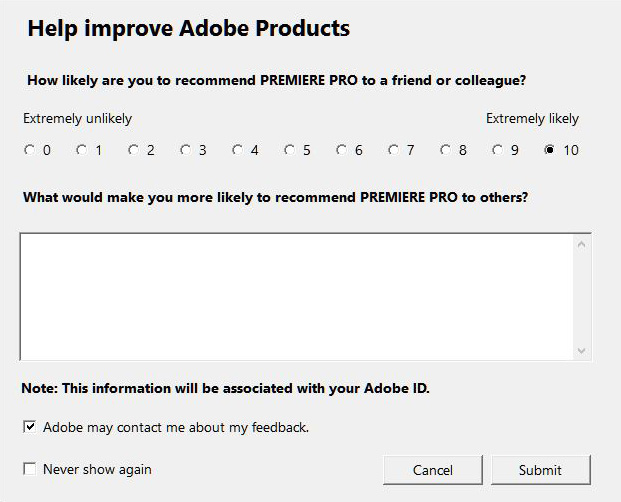 What is the result? In the summary Fred Reichheld compiled in his book the value between sectors and companies varies [3]. The best companies reach a NPS value of 60-80 % (for ex. Apple, Amazon). The average is in the range of 10-20 %, which means that the number of Ambassadors barely exceed the number of Detractors.

Fred Reichheld argues that the NPS value shows that the companies with the highest NPS value in a particular industry tend to have both higher profits and higher growth rate compared to the similar companies with lower NPS value. He believes that there are several reasons for that, for ex. the best companies can often (compared to competitors) charge a higher price. They may also have lower marketing costs and costs to gain new customers.

Even though the NPS method is based on the only (1) ultimate question, the NPS is not only a measuring indicator. NPS ultimately is a business philosophy, a system of operational practices, and a leadership commitment. It is not just another way to measure customer satisfaction. To really put the customer in focus is a comprehensive approach that affects the entire business. NPS should, therefore, be seen as a tool for building up processes and procedures that are based on the company’s business idea. To be successful, the company’s top management must realise the importance and be actively supportive and engaged in the development of true customer loyalty.

The result of the NPS measurements must be frequently repeated and continuously analysed. The outcome should be used as a basis for further improvement and development of products and services. A well implemented NPS method should be seen as vital part of the leadership culture and the management of the company. In other words, successful NPS measurements are not a part of a campaign; it is a long strategic journey[3].

Hence, to be able to measure employee loyalty the NPS model has been extended to the eNPS- model (employer net promoter score). The ambition is to understand the employees’ loyalty to the company by asking them the question “How likely is it that you will to recommend the company as a place to work at”. Often the recommendation is followed by the supplementary question where employees are asked to give a reason for their response.

Because of its simplicity NPS has become a popular method in many private and public businesses. Properly used in a wider management system, the NPS is an interesting and simple factual model for measuring customer loyalty. But all methods based on relatively simple models have some obvious weaknesses. I will, therefore, share my reflections and criticism about the NPS method in the next blog.